Why are horseshoes considered lucky?

Horseshoes have long been considered lucky. They were originally made of iron, a material which was believed to ward off evil spirits and fairies. Mischievous fairies could not stand the touch of iron, so they shied away from houses that were adorned with it. Traditionally horseshoes were held in place with seven nails as seven is the luckiest number.

The superstition acquired a further Christian twist due to a legend surrounding the 10th century saint Dunstan who worked as a blacksmith before becoming Archbishop of Canterbury. The legend recounts that, one day, the Devil walked into Dunstan’s shop and asked him to shoe his horse. Dunstan pretended not to recognize him, and agreed to the request. But rather than nailing the shoe to the horse’s hoof, he nailed it to the Devil’s own foot, causing him great pain. Dunstan eventually agreed to remove the shoe, but only after extracting a promise that the Devil would never enter a household with a horseshoe nailed to the door. Thus, any house with a horseshoe was guaranteed to be free of the devils influence and considered lucky.

How to hang your horseshoe 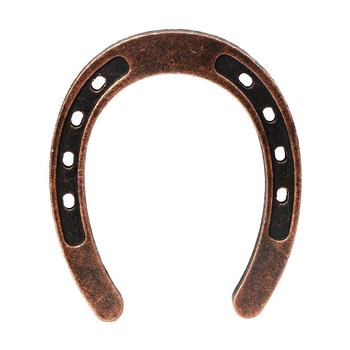 Superstitious sailors believe that nailing a horseshoe to the mast will help their vessel avoid bad weather, storms and disasters.

We use cookies to ensure that we give you the best experience on our website. If you continue to use this site we will assume that you are happy with it.Ok